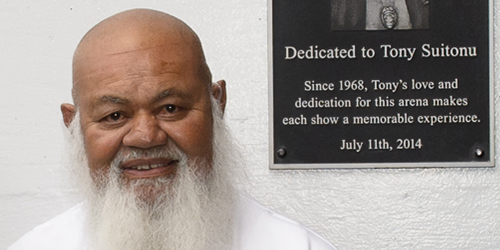 This week, Pechanga Arena San Diego lost a longtime member of its family. Tony Suitonu was a tenured security guard at the arena who first came to work with us in 1968. In 2014, the arena dedicated the backstage loading ramp to him, renaming it the “Tony Suitonu Ramp”. In recent years, he battled against cancer, but still attended employee functions and holiday celebrations. Suitonu was 79.

Pechanga Arena San Diego General Manager Ernie Hahn shared on social media, “Tony Suitonu was a special man. He greeting music’s greats, all sports stars of all types, family shows, you name it for the last 50 years at the “infamous back ramp”. Almost Famous showed the ramp in action in the movie, Tony was the man that made it famous every day. He would treat touring crews to fishing trips on the bay during their stay and, boy, did he love our arena as much as anyone! By surprise, we honored Tony on July 11, 2014 by naming the back ramp the ‘Tony Suitonu Ramp’. We all cried tears of joy that day. Today, we cry tears of sadness for a man we loved that made our ramp famous.”

Hahn shared more of his thoughts and stories on The John Kentera Show on 97.3 The Fan. You can listen here.

San Diego radio and television producer “Little Tommy” Sablan shared, “He is as legendary as the venue he worked at. When I was a teenager, he was the one to outsmart to get backstage to meet our rock and roll heroes at the Sports Arena. I never got passed wherever he was positioned. He was on to me! He would shake his head at me and point to the top of the ramp to get my butt out of there. As the decades went on and on, I was able to have a conversation with him and I would tell him I used to try to sneak by him. He said he remembered and was happy I grew out of that stage in my life. He was a good man! He had that islander hospitality even when kicking me out of his assigned area!”