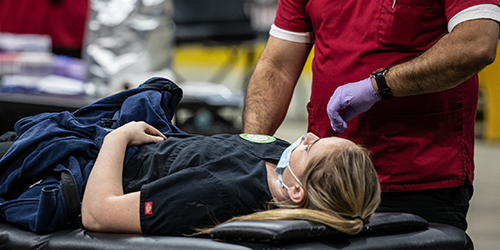 Blood banks all over the country are urging people to come out and donate during these crazy times. San Diegans heard the call with over 100 people signing up to give during the San Diego Heroes Blood Drive at Pechanga Arena San Diego, CBS 8 reported.

The event is a partnership between Kyle Kraska’s Celebration of Heroes, Pechanga Arena San Diego, and The Red Cross.

“Using the facility for other events and charities and non-profits is an important part of what we do. In addition to the 130 events that we do, including Gulls hockey and about 40 concerts a year. We host all sorts of other events that utilize the faculty for the community and this is a great need and a great cause. So, we’re excited to host the event today,” said Ernie Hahn, General Manager of Pechanga Arena San Diego.

The Red Cross says volunteers donating blood is the only way they can keep the supply up throughout the year. According to the American Association of Blood Banks, over 4,000 blood drives have been canceled from mid-March due to the coronavirus. That equates to 130,000 donations being lost.

Although Tuesday’s blood drive reached its capacity, you can always schedule a donation online.