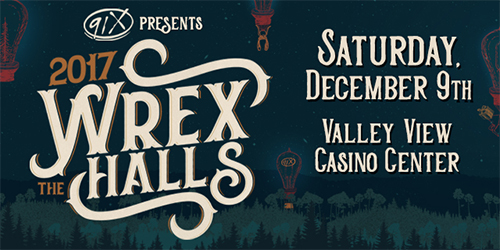 Pechanga Arena San Diego is offering parking at a discounted rate of $10 for those who donate a new, unwrapped toy benefiting The Salvation Army and Rady Children’s.

The fine print: Toy must be new and unwrapped with tags or appear to be new. Final call on Ace Parking representative or volunteer/Guest Service representative.

The Lumineers, Vance Joy, DREAMCAR, The War on Drugs, The Arkells and Buckfast SuperBee.

Back then, growing up in the New York City suburb of Ramsey, New Jersey, Wesley spent his days drawing. Today, as bandleader of The Lumineers, Wesley’s replaced his pencil with a guitar and his drawings with songs. He still practices a lot, and it still turns out good.

In the spring of 2005, childhood friends Wesley and Jeremiah began to collaborate, writing together and playing gigs around New York. After battling the city’s cutthroat music scene and impossibly high cost of living, the two decided to expand their horizons. They packed everything they owned—nothing more than a couple suitcases of clothes and a trailer full of musical instruments—and headed for Denver, Colorado. It was less a pilgrimage than act of stubborn hopefulness.

The first thing they did in Denver was place a Craigslist ad for a cellist, and the first person to respond was Neyla Pekarek, a classically trained Denver native. As a trio, they began playing at the Meadowlark, a gritty basement club where the city’s most talented songwriters gathered every Tuesday for an open mic and dollar PBRs. Neyla softened Wes and Jer’s rough edges while expanding her skills to mandolin and piano. And so The Lumineers sound took shape; an amalgam of heart-swelling stomp-and-clap acoustic rock, classic pop, and front-porch folk.

In 2011, an eponymous, self-recorded EP led to a self-booked tour, and before long The Lumineers started attracting devout fans, first across the Western US, then back in their old East Coast stamping grounds. Young, old and in-between, they’re drawn by songs like “Ho Hey” and “Stubborn Love,” Americana-inflected barnburners in the vein of the Avett Brothers and Mumford & Sons. They’re drawn by songs like “Slow it Down” and “Dead Sea,” slow, sultry ballads that suggest the raw revelations of Jeff Buckley and Ryan Adams. They’re drawn by the live Lumineers experience—a coming-together in musical solidarity against isolation, adversity, and despair.

The roots revival of the last few years has primed listeners for a new generation of rustic, heart-on-the-sleeve music—the kind that nods to tradition while setting off into uncharted territory. The Lumineers walk that line with an unerring gift for timeless melodies and soul-stirring lyrics

Powered by passion, ripened by hard work, The Lumineers have found their sound when the world needs it most.

Vance Joy has an original voice which at first he kept to himself. Feeding on a diet of The Pogues, Paul Kelly, and whatever else was playing, he cut his teeth performing at open mike nights in Melbourne. It is folk music with pop influences. His songs capture the familiar pulse of everyday experiences in a unique and celebratory manner. His lyrics will reach out to you and hold on for a moment.

The War on Drugs

Philadelphia’s The War on Drugs reside at the blurred edges of American music: overexposing studio limitations, piling tape upon tape to maximum density, and then — with each song — they pull off the scaffolding to reveal what sticks, keeping only what’s absolutely necessary and dig into what sounds like the best kind of fucked up. As on their 2008 debut, Wagonwheel Blues, central member Adam Granduciel takes small moments occurring over multiple tapes and multiple song versions, and puts every last drop of trust in his own keen instinct of momentum.

That’s not to overshadow the sharp, personal songwriting at play here. There are certainly cues taken from our very best American bards (Dylan, Petty, Springsteen). Yet, The War on Drugs are wise enough to also implode those cues or send themselves into outer space when the moment calls for it. The driving organ riff that pushes “Baby Missiles,” from the band’s 2010 epic EP Future Weather, may well be inspired by a fever dream of Springsteen rather than any particular song in his catalogue. And the endless layers of guitar melody and atmospherics of “Comin’ Through,” also from Future Weather, rather than add weight to the vessel, only work to fill its sails with warmer and warmer winds.

Arkells met in school. They are a critically acclaimed rock n roll band, known for their classic songwriting, electric live show, and workman like touring ethic. Their new album, High Noon, was produced by Tony Hoffer (Beck, The Kooks, M83) and these collection of songs are the band’s most unabashed effort yet – politically charged, heart on your sleeve lyrics combined with adventurously modern and throwback production stylings.