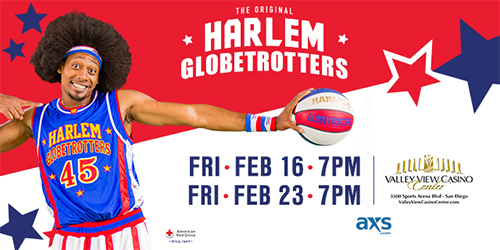 The Harlem Globetrotters known for their one-of-a-kind family entertainment will bring their 2018 World Tour to Pechanga Arena San Diego on FRIDAY, FEBRUARY 16 & FRIDAY, FEBRUARY 23 at 7PM to take on their long-adversaries, the Washington Generals.

The Globetrotters will face a revamped Washington Generals team which recently launched a more competitive profile, making an appearance in The Basketball Tournament over the summer. The tournament-tested team is looking to snap a 47-year losing streak against their world famous rivals during their 2018 tour.