Iconic local alternative rock radio station 91X announced that English alt-rockers The 1975 will return to San Diego for the first time in over 2.5 years, to perform this holiday season on Thursday night, December 5 at Pechanga Arena San Diego.

Also performing are Welsh indie rockers Catfish and the Bottlemen, neo-glam rock duo I Don’t Know How But They Found Me, commonly abbreviated as ‘iDKHOW,’ and genre-bending locals Fashion Jackson.

91X Program Director Garett Michaels said, “Our listeners have been telling us that they’d like to see the headliners perform a full concert set, rather than the abbreviated sets that are commonplace at festivals.  We’ve taken that feedback to heart with The 1975 performing a full concert set.  Additionally, we’re excited to present electrifying performances from Catfish and The Bottlemen, iDKHOW and Fashion Jackson.  It’s going to be an incredible night of music.” 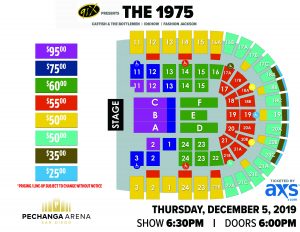