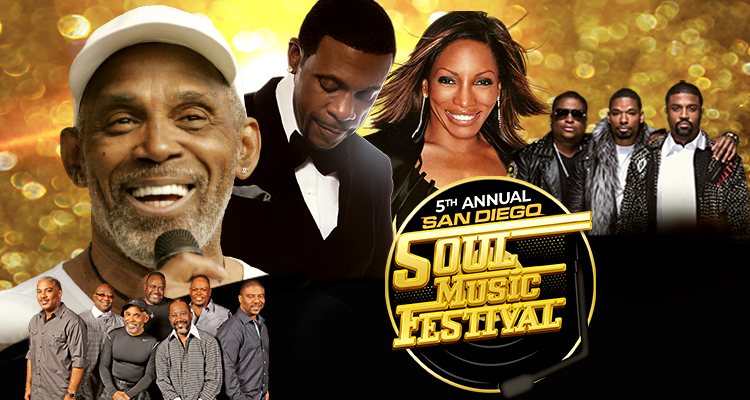 G-Squared Events is excited to announce their upcoming event entitled “The 5th Annual San Diego Soul Music Festival” with Maze featuring Frankie Beverly, Keith Sweat, Stephanie Mills, and Next. The event will take place on April 6, 2019, at the Pechanga Arena San Diego in San Diego, California.  Doors are scheduled to open at 6:30PM and the event will take place at 7:30PM.  Presale begins on November 9, 2018, at 10AM at Ticketmaster.com and at the Pechanga Arena San Diego Centre Box Office.  Tickets will go on sale to the general public starting on November 12, 2018, at 10 AM.  Ticket prices for the event range from $42.50 – $150.

Maze featuring Frankie Beverly have created a unique sound, becoming one of the most influential groups in modern history. The journey began when Beverly relocated from his hometown of Philadelphia to San Francisco and formed Maze.  In 1976, he released his first album Maze Featuring Frankie Beverly which yielded a string of hit singles, including “Lady of Magic” and “Workin’ Together.”  The 1980’s brought the release of the best-selling albums, Golden Time of Day, Inspiration, Joy and Pain, containing a list of chart-topping singles, including “Travelin’ Man,” “Feel That You’re Feeling,” “Joy and Pain,” “Look in Your Eyes” and “Southern Girl.” The group gained worldwide appeal with its legendary sold-out live appearances and released the deluxe album Live in New Orleans which captured the energy, excitement and electricity of a Maze stage show and offered a fourth side of new studio material which included the hit single “Running Away.”

In 1983, with the release of We Are One, Frankie Beverly & Maze solidified their international standing with such hits as the title track “Never Let You Down”, “I Love You Too Much” and “Love is the Key.” As the 80’s came to a close, the group released Can’t Stop the Love and a second in concert package, Maze Featuring Frankie Beverly Live in L.A., which served both as a retrospective of the group’s remarkable career to date and a fitting close to the first chapter of the Maze legend.  The band then released Silky Soul, one of its most successful albums, which included the smash singles, “I Can’t Get Over You” and the title track.  Back to Basics followed, which captured the passionate, electrifying essence of the group, and included the hit singles, “Laid Back Girl,” “The Morning After” and “What Goes Up.”

Maze Featuring Frankie Beverly continues to tour the U.S. and Europe proving that their music is still unique, relevant and contemporary after three decades.

Keith Sweat is a Harlem, New York, born songwriter/ record producer/ vocalist / actor/ radio personality, with a career that spans 24 years of record breaking and trail blazing contributions to the Pop and R&B genre.  He is coined the genius behind the New Jack Swing phenomenon of the late 1980’s.  Keith Sweat’s timely transition to the R&B mecca of Atlanta in 1992 added “label impresario” to his roster of talents.  Keith has dominated the Pop and R&B worlds with an undeniable presence.  His debut and now classic album Make It Last Forever sold more than three million copies, producing four R&B hit singles, including “I Want Her,” which also landed at #5 on the Pop charts.  The album stats also include a nomination for the 1989 Soul Train Best R&B/Urban Contemporary Song of the Year award. Keith Sweat has delivered five straight #1 albums, selling a worldwide total of 25 million records.  His self-titled 1996 effort, Keith Sweat, gained quadruple platinum status.  His critically acclaimed collaboration with fellow superstars Gerald Levert and Johnny Gill on the double platinum LSG, was launched a decade after he first landed in the music business.

On the cusp of his third decade in the spotlight, Sweat has almost become a genre unto himself, his pleading ballads a mainstay of radio’s “Quiet Storm” format. As if in acknowledgement of that, Sweat hosts the #1-night time nationally syndicated radio show, “The Sweat Hotel”. The live call-in program boasts 3 million listeners exchanging dialogue with Keith about matters of the heart.  Keith Sweat garners an impressive fan base in the fickle genre of Pop R&B and continues to redefine boundaries.

Stephanie Mills is a Grammy award–winning singer, songwriter and Broadway stage actress.  Mills rose to stardom as “Dorothy” in the original Broadway run of the musical The Wiz from 1975 to 1977.  The song “Home” from the show later became a number 1 R&B hit for Mills and her signature song.  During the 1980s, Mills scored five number one R&B hits, including “Home”, “I Have Learned to Respect the Power of Love”, “I Feel Good All Over”, “You’re Puttin’ A Rush on Me” and “Something in the Way (You Make Me Feel)”.  Mills’ won a Grammy Award for Best Female R&B Vocal Performance for her song “Never Knew Love Like This Before” in 1981.

Next is an American contemporary R&B musical trio, popular during the late 1990s and early 2000s.  They are best known for their #1 hit single “Too Close” as well as “Wifey“, and “I Still Love You” which all still receive frequent airplay on Adult Contemporary radio stations both in the US and internationally.

Military Groups of 10 or more save up to $10 off Select Seats
For Group Sales Contact Jennifer Chavarria
Phone:  619-363-5330
Email:  Jen@JDCgroupmarketing.com
Website:  https://www.jdcgroupmarketing.com/ 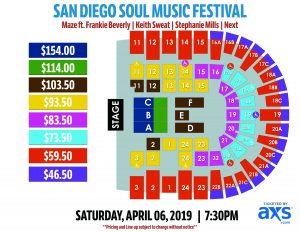