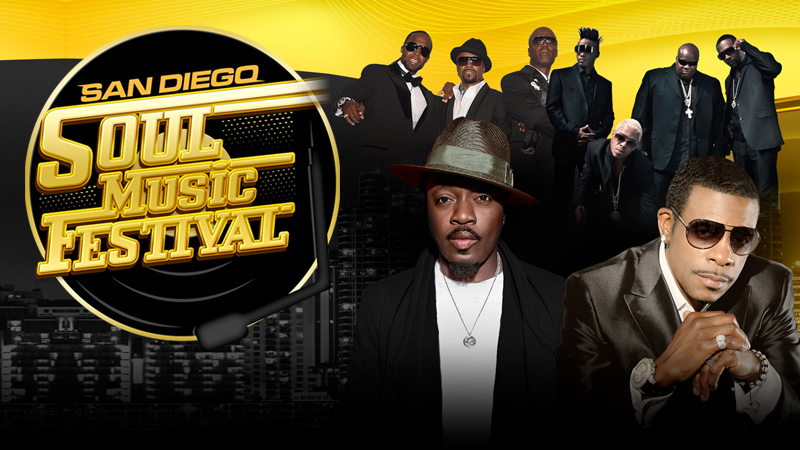 ANTHONY HAMILTON: Before Anthony Hamilton laid down the gospel as an R&B singer, the Charlotte, North Carolina native found his calling as a member of the church choir. “It’s like that feeling you get hearing somebody else lead that made me start to really pay attention to music, not just sonically but what it did to people,” says Hamilton, who began singing at six or seven years old. An introvert raised with his brother and sister by a single mother (his father left when he was nine years old), Hamilton found comfort in a foam-covered speaker while dreaming of stardom. “I was a child who had a very wide imagination and I would become the song. I used to listen to “Ben” by Michael Jackson a lot and I would dream like one day I’m gonna become a famous singer. I said that over and over again for years and I always believed it.”

Over two decades worth of label changes later (past deals included Uptown, MCA, Atlantic Records, Soulife Records, Andre Harrell’s Harrell Entertainment and Jermaine Dupri’s So So Def Recordings), Hamilton has found his happy place on RCA Records. Following up 2011’s Grammy-nominated effort Back To Love and his 2014 Christmas offering Home For The Holidays, the R&B cantor maintains his Southern sensibility and poignant songwriting on his fifth studio effort What I’m Feelin.’ Its lead single “Amen” — a melodic love note produced by Salaam Remi and James Poyser, praises a special lady’s efforts. “’Amen’ is just celebrating the beauty that a woman makes you feel, not just physical attributes, but the fact that she works, she goes to church, prays for you, cooks, cleans, just all those things that a woman brings to the table,” Hamilton explains.

The 12-track offering is also an emotional cleanse for the musician, who announced his divorce from his wife of nearly 10 years in 2015. “Anytime you spend that much time with someone, there’s a long connection that you have and even though it seems like you’re moving on, you’re still tied to the person,” he says who dedicates the reflective track “Walk In My Shoes” to his ex-wife. “I’m tellin my wife like you gotta be me, my past and all the things that shape me, all my fears, and whatever it is I’ve been through that made me the man that I was and hindered me from being the man that I wanted to be.” On other standouts like the melodic “What I’m Feelin’,” Hamilton opens up about the struggles of letting go. “We get into these relationships and sabotage them because of a fear of creating the unknown, the beautiful, the peace and a place where you can let go,” he says. “Being able to totally let go is something I look forward to doing.”

Recording majority of the What I’m Feelin’ in Nashville, TN at the iconic Blackbird and House of Blues studios, Hamilton reunited with longtime collaborator, Mark Batson, who produced some of his biggest hits including 2003 Platinum smash, “Charlene” along with his close engineer Bruce Irvine. The celebratory set showcases life’s highs more than the lows. In addition, Hamilton recruited guitar heroes Vince Gill for the country-leaning “Never Letting Go” and Grammy Award winner Gary Clark Jr. on the worldly “Ain’t No Shame.” On the latter, Hamilton belts, “Time waits for no one/ Ain’t no shame in playing hard,” as a PSA to never settle. “There are people that never experience anything outside their front porches,” he says. “Get off the front porch, walk in the yard and I’m sure you’ll find something that’s beautiful.”

Hamilton is known for flipping heartbreak into a blessing as heard on his biggest ballad “Charlene.” After a significant relationship had ended, he left his one-bedroom brownstone apartment in Harlem on 146th Street and Convent Avenue and took the train to 33rd Street to meet with producer Batson at a Manhattan recording studio. “My record deal [at the time], I was pretty much trying to get off. I remember I didn’t have a lot of money. At that time, I was heartbroken,” he reflects. “I just poured my heart out and [“Charlene”] was one of the songs that came out of it.” He notes that his soulful formula stays consistent with What I’m Feelin’, even on a personal level. “I’m fully capable of taking from a broken place and truly turning it into something amazing,” says Hamilton confidently. “I’m truly capable of loving in spite of my situation. I think I still have a fear of letting go to a degree and I think there’s preparations I need to do to get there. I’m not done yet.”

Hamilton’s decorated catalog includes his 2003 debut, Comin’ From Where I’m From (which carried the hit title track), 2005’s Ain’t Nobody Worryin’ among other efforts. He has earned several Grammy nominations, like “Po’ Folks,” the 2002 Nappy Roots collaboration that earned a nod for best rap/sung collaboration, and won his first trophy in 2009 for best traditional R&B vocal performance for his duet with Al Green on “You’ve Got The Love I Need.” He has also lent his vocals to a variety of talent includingNas, Rick Ross, Carlos Santana, Jill Scott, Tupac, and Al Green to name a few. His first album in over five years, What I’m Feelin’, will be released via RCA Records on March 25th.

KEITH SWEAT, a Harlem-born R&B singer/songwriter known for his distinctive “whining” vocal style, co-produced 1984/1985 singles by GQ and Roberta Gilliam and issued independent singles of his own (“Lucky Seven” and “My Mind Is Made Up”), but he didn’t release his debut full-length for Elektra, Make It Last Forever, until November 1987. The album sold over three-million copies, spawning the hits “I Want Her” (number one R&B, number five pop), “Something Just Ain’t Right” (number three R&B), “Make It Last Forever” (number two R&B), and “Don’t Stop Your Love” (number nine R&B). It was followed in 1990 by I’ll Give All My Love to You, another million-seller, which featured the hits “Make You Sweat” (number one R&B, number 14 pop), “Merry Go Round” (number two R&B), “I’ll Give All My Love to You” (number one R&B, number seven pop), and “Your Love, Pt. 2” (number four R&B). Sweat’s third album was Keep It Comin’, an R&B chart-topper at the end of 1991 whose title track was another number one R&B hit.

Through the end of the ’90s, Sweat’s mainstream profile wasn’t quite as high, but he remained a major force in R&B as he recorded the occasional contemporary set, including Get Up on It (1994), Keith Sweat (1996), and Still in the Game (1998). Additionally, the first of two albums recorded with Gerald LeVert and Johnny Gill, billed as LSG, was considerably successful, and he also produced a handful of prominent ’90s acts, such as Silk, Kut Klose, and Dru Hill. The following decade began with Didn’t See Me Coming (2000) and Rebirth (2002), his final releases for Elektra. He moved to Atco for Just Me (an R&B chart-topper in 2008), then to Kedar for Ridin’ Solo (2010). ‘Til the Morning (2011) was the first release on his KDS label. Sweat starred in the Centric channel’s reality program Keith Sweat’s Platinum House, in which he facilitated a turbulent Dru Hill reunion. Dress to Impress (2016) featured that group, as well as Silk, as guest collaborators. At the time of its release, The Sweat Hotel, his long-running syndicated radio program dedicated to R&B from the ’70s to the present, was nearing its tenth anniversary. ~ William Ruhlmann & Andy Kellman, Rovi

GUY FEATURING TEDDY RILEY: Guy was formed in Harlem, New York in 1987 by R&B singer-songwriters Teddy Riley, Aaron Hall, and Timmy Gatling. Riley and Gatling were childhood friends growing up in Harlem, and previously collaborated in the band Kids At Work.[1] Hall was recruited to join what would become Guy.[2] As well as writing songs for their own group, Riley and Hall collaborated on other songwriting and production projects, including Bobby Brown’s “My Prerogative” and Johnny Kemp’s “Just Got Paid”.[1]

DRU HILL: Founded in 1992 as “14K Harmony,” the group, discovered by manager Kevin Peck, evolved to become “Dru Hill” in 1996, engraving itself into the legacy of R&B music and bringing a dynamic sound to the ever-changing industry. Known for hits like “Tell Me,” “In My Bed,” “Never Make a Promise,” and “How Deep Is Your Love,” the group has given the world music for the ages. As the dynamic quartet gears up to celebrate their 20th Anniversary, it’s clear that they’ve just gotten started. In celebration of their journey thus far, the group has exciting surprises in store for its expanding fan base everywhere. Recording new material and continuously performing at sold-out venues around the globe, Dru Hill continues to solidify its legacy as one of the greatest groups of all time.