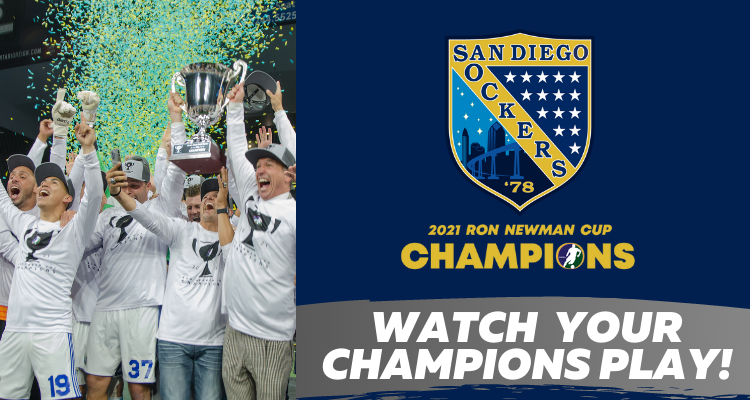 The San Diego Sockers will play in the West Division with traditional rivals Ontario and Tacoma, as well as MASL newcomer Chihuahua Savage. The Sockers will face the Fury and Stars six times each, and the Savage four times. All home games will continue to be played at Pechanga Arena San Diego, a venue that has witnessed 11 of the Sockers’ 15 championships.

The Sockers will open their 2021-22 schedule on the road, playing in Tacoma on December 11. The club’s home opener will be on Sunday, December 19 at 5:05pm, hosting Chihuahua. San Diego will honor their defending 2021 Ron Newman Cup champions with a pre-game ring and banner-raising ceremony. The three-match opening homestand will conclude with back-to-back Sunday games against Ontario on January 2 and January 9.

The Sockers hit the road for four consecutive matches, starting with a January 16 contest in Ontario, traveling to Chihuahua for back-to-back games on January 21 and 22, and returning to Toyota Arena in Ontario against the Fury on January 26.

After welcoming in Tacoma on Friday, January 28 for a 7:35pm contest, the Sockers will face the East Division’s Utica City FC for the first time in franchise history on Sunday, January 30 at 5:05pm. The Stars return on Sunday, February 6 to the Arena, then the two clubs relocate to Tacoma for back-to-back matches on February 11 and 12. The Sockers will wrap up a three-match road trip with a Tuesday, February 15 contest at Ontario.

Central Division stalwarts highlight a three-match homestand in late February, as the Sockers welcome in the Kansas City Comets on Friday, February 25, and the Milwaukee Wave on Sunday, February 27. The Sockers-Wave match will put the last two defending Ron Newman Cup champions on the field at the same time (Milwaukee did not participate in the 2021 COVID-shortened MASL season). The homestand concludes on Saturday, March 5 against Chihuahua, the club’s lone Saturday night home game of the season.

A challenging end to the regular season will see the Sockers make a pair of East Coast road trips for back-to-back games, traveling to Baltimore and Utica on March 12 and 13, and to Baltimore and Harrisburg on March 26 and 27. In between, the club will host Tacoma on Sunday, March 20. The season concludes with a Thursday, March 31 contest against the Florida Tropics, and Sunday, April 3’s Fan Appreciation Night against the Fury.