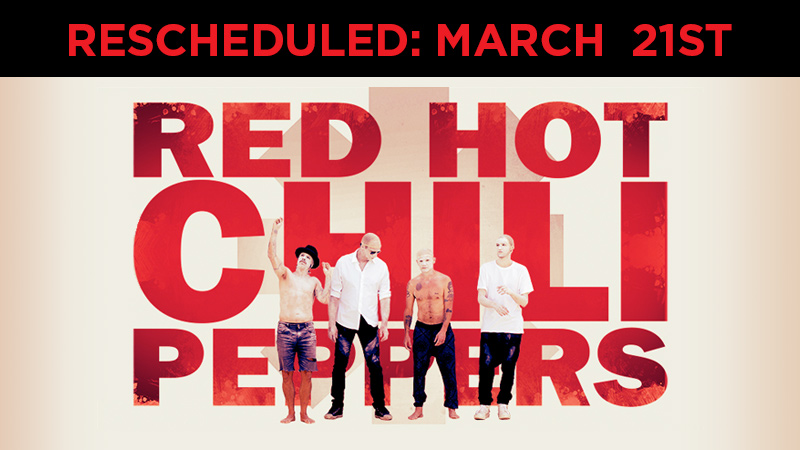 Due to illness, the Red Hot Chili Peppers are rescheduling Sunday’s San Diego performance to TUESDAY MARCH 21ST.  All previously purchased tickets will be honored on the new date.

Statement from the band:

“We are so sorry that we cannot come to San Diego as planned. Anthony has been fighting off the bronchitis all week and still needs a few more days to recover. We are sorry for any inconvenience to our fans and look forward to seeing you on March 21st.”

The Red Hot Chili Peppers are an American alternative rock band formed in Los Angeles in 1983. One of the most successful acts in rock history whichconsists of current members Anthony Kiedis, Flea, drummer Chad Smith, and guitarist Josh Klinghoffer, have sold more than 60 million albums, including five multi-platinum LPs, and won six Grammy Awards, including “Best Rock Album” for Stadium Arcadium, “Best Rock Performance By a Duo or Group” for “Dani California,” “Best Rock Song” for “Scar Tissue,” and “Best Hard Rock Performance With Vocal” for “Give It Away.”  The band was inducted into the Rock and Roll Hall of Fame in April 2012.

The band’s newest album, The Getaway, debuted at #1 on the Billboard Album Sales Chart and at #2 on the Billboard Top 200 upon its release in June. The Getaway marks the Grammy Award-winning band’s seventh top 10 album and third #2 on the Top 200 Chart. The album debuted at #1 in Australia, Belgium, Ireland, Netherlands, and New Zealand and at #2 in the United Kingdom and Germany.

The album was praised by Rolling Stone: “top-shelf modern-rock splendor”, People: “their best album in ages”, USA Today: “…proves not only that the longtime rockers still sizzle 30 years in, but also are capable of victoriously revamping their sound”, and many more.

Watch the video for the band’s “Dark Necessities,” HERE and “Go Robot” HERE.