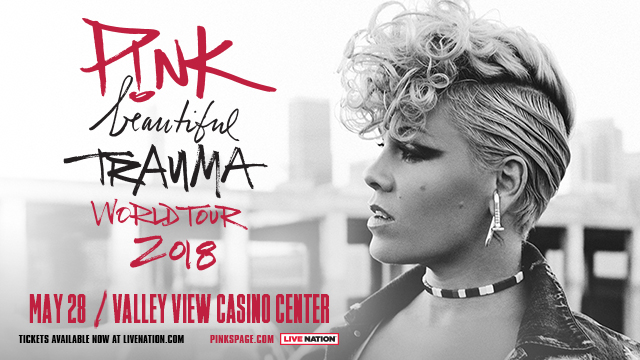 In addition, 15 of P!nk’s singles have reached #1 in at least 1 or more countries. She is the recipient of 3 Grammy Awards, 3 Billboard Music Awards, 6 MTV Video Music Awards, 2 MTV Europe Awards, 2 People’s Choice Awards, and many more. P!nk’s most recent effort, The Truth About Love debuted at #1 on the Billboard Top 200 as well as in 6 other countries. The album marks P!nk’s first #1 debut in the US and a personal first week sales best. The album is certified platinum in the US and was nominated for a 2013 Grammy for Best Pop Vocal Album. The Truth About Love produced the smash singles “Blow Me (One Last Kiss)”, “Try” and “Just Give Me A Reason” ft. Nate Reuss which marks P!nk’s 12th, 13th and 14th Top 10 hit on the Billboard Hot 100. “Just Give Me A Reason” has sold over 4.5 million singles, makes P!nk’s fourth #1 on the Billboard Hot 100 and was nominated for 2 2014 Grammy Awards for the coveted Song of The Year category and Best Pop Duo/Group. P!nk recently wrapped her The Truth About Love World tour after playing 140 shows in 13 countries. In December 2013, P!nk received the honor of being named Billboard’s Woman of the Year.

She is currently a spokesperson for COVERGIRL, made her acting debut in Lionsgate’s Thanks For Sharing alongside Gwyneth paltrow and Mark Ruffalo and is a huge supporter of various charities including Ronald McDonald’s House, Make A Wish Foundation, PETA, Autism Speaks, Human Rights Campaign, and Save the Children.