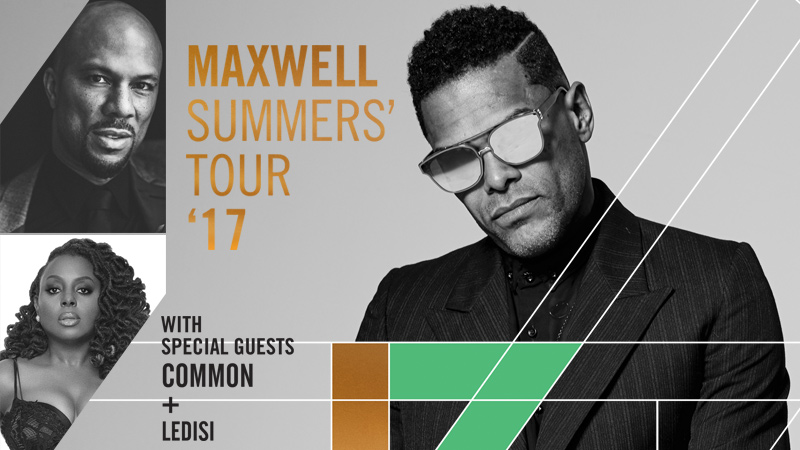 Maxwell has artfully managed to transfix music lovers for more than two decades, releasing 4 studio albums, all in his own time – all duly anointed as classics. Now, the Brooklyn-born soul legend returns with his 5th album, BlackSUMMERS’night, the long-awaited second installment of his trailblazing trilogy, a powerful reminder that great music really is about more than moving the twitter needle.

Maxwell’s reentry into the pop orbit straddles but never strains the fertile groundwork he’s already laid as an R&B/soul pioneer.  His seminal 1996 debut album, Maxwell’s Urban Hang Suite, which the New York Times credited for ‘turning away gangsta’ machismo to reclaim the utopian spirit of 70s soul…’has been enthusiastically re-celebrated recently in an avalanche of commemorative articles marking the 20th anniversary of the genre spawning debut.  His last album, 2009’s #1 debuting, Grammy-winning BLACKsummers’night and its signature single “Pretty Wings,” (which owned the top spot on the Hot R&B/Hip-Hop Singles Chart for 4 and a half months) tamped down Chapter 1 of the sensual, pathfinding trilogy.  The album landed on most critics’ Year’s Best lists and snared 2 Grammys, with Rolling Stone praising it as an ‘album about love, not sex, for grown-ups who know the difference.’

The ambitious follow-up reaffirms Maxwell’s commitment to further the musical crossroads, even as he acknowledges his own reluctance to willingly let go of his own creations: “I knew the new album was good, that it was done – but they still had to tear it from my hands to get it out,” he says.  Most revealingly, he admits to arriving at a ‘good place’ at 43 years of age, equipped with a keener sense of proportion about the seductive mystique he has come to represent.  “I think what messes up a lot of pop artists after they’ve been down the road a bit is that the record becomes much more about their personal drama instead of the music.  I’m not going to disrespect anyone’s hustle, but I’m not interested in being a celebrity.  Today, you have people purposely marketing their personal life into their music.  With me, you’re looking at a mom and pop store,” he laughs.  “I need that spark that drives the music, but within that life I always want to create something that affects people emotionally and spiritually. At the end of the day that’s what enables me to become secondary to the experience of the music.”

With sonic aspirations and priorities intact, and gathering many of the contributors on board for his previous albums, Maxwell says the ‘operative’ driving theme on the new album is ‘summer.’  The first single, the stunning “Lake By The Ocean” kick-crosses diced-up drum grooves to the singer’s undulating sensuality.  His legendary vocal nuances are even richer now, commanding our attention with less on blackSUMMERS’night, seductively shifting intonation and meaning as he reaches for more than just a reprise on the sequel; a master fully in charge of his instrument.

It’s all there on songs such as the album’s boogie blast of an opener, “All The Ways Love Can Feel,” and the intensely brewed confessional “The Fall”; on the hopeful “Fingers Crossed,” and bright funk of “III,” where he furtively name-checks Michelle Obama.  The free-floating blues-driven “Lost” and “Listen Hear” are also standouts, two songs that Maxwell says simply “flowed through” him in one take.

He credits vigorous recording sessions with his longtime co-producer Hod David as bringing shape to the album. “The times change and the stakes get bigger, but when you’ve worked with the same guy since you were 17 there’s no faking it,” he jokes.

He once famously told Rolling Stone after the release of his debut that everyone he’s ever admired possessed a public vulnerability – ‘where the sensitivity is right there for you,’ confessing, even then, that it’s not always easy to come by – that ‘sacrificing side,’ as he coined it.  It is here where the boundary crossing, inspirational Maxwell has always been the most prescientand approachable; open 24/7 to his long-held notion that the music is in the atmosphere, and that his best work has always channeled him.  “Maybe that’s what taking your time is really about,” he ponders nearly 20 years later.  “Being available.  Ready.”

Nailing it on the riveting “Lost” on the initial try – singing the song for the very first time – is ample evidence of being in tune to life’s full effects.

He likens the song in spirit, at least, to BLACKsummers’night touchstone single “Pretty Wings” – “if “‘Pretty Wings’ ended up having children and going on,” he laughs, marveling at how the former song is now played at weddings.  “That song as intended is about breaking up and letting someone go and people now celebrate it at the most important gathering of their lives.  But that’s OK with me too,” he says.  Maxwell cites another nod to the inaugural album of the trilogy, “Fingers Crossed.”   “In some ways it’s straight-up “Fistful Of Tears” Part 2 – that feeling of wanting someone to feel good about being involved with you.  But I want all my songs to have a life of their own.  To be interpreted how people hear and feel them in the normal course of their lives.”

That unmediated connection to his audience has always been the lynchpin of Maxwell’s career.  Known for stoking libidinal fires long after his records and concerts subside, the LA Times once shrewdly observed he’s also ‘stayed true to his own internal clock, timing his (musical) pleas as they might unfold in real time,’ rejecting the impulse to falsely heighten any moment.

His 1996 debut masterpiece, Maxwell’s Urban Hang Suite, was the rarest of gems, new and cognizant of the soul-standard bearers who came before. Groundbreaking permutations came in the form of iconic singles such as “Til The Cops Come Knockin’,” and “Ascension (Don’t Ever Wonder),” among others.

He went on to acclaimed platinum-plus successes with 1998’s Embrya, and 2001’s Now, enjoying sold-out tours and an ever-expanding loyal audience more than willing to grow with him.

And they never mind the ‘wait,’ which has only deepened the mutual appreciation between Maxwell and his fans. His tight, communal bond with his listeners fuels blackSUMMERS’night, revealing new surprises and aching links to a musical canon that peels back the curtain on love and heartbreak like only Maxwell can.

When asked if there’s any final litmus-test he conducts personally before letting his able team snatch the new songs from his clutches, Maxwell smiles.  “The music has to ‘bump.’  I’m always asking – is the music bumping enough.  And it really has to work in the car.  If it’s not bumping in the car, it’s not coming out.”