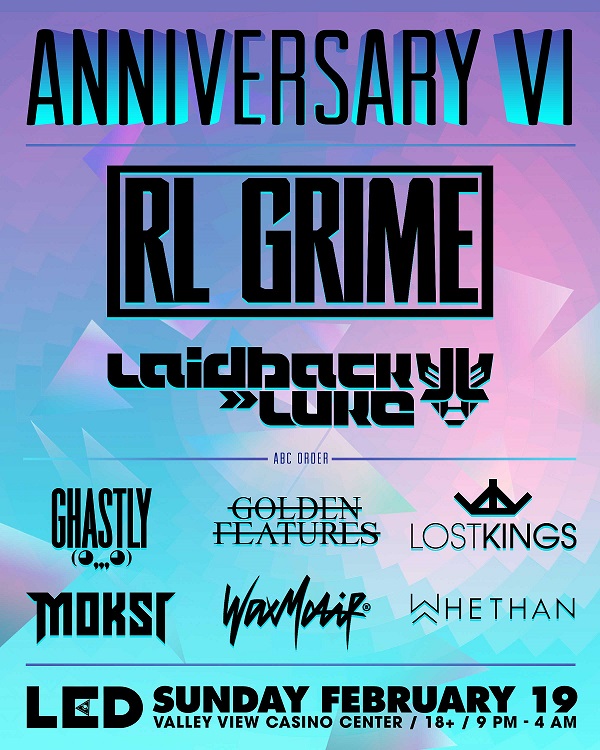 RL Grime: When New York City-based DJ/producer Henry Steinway combines hip-hop and electro for the genre known as “trap” he dons the moniker RL Grime. After debuting the project in 2011 with a series of internet uploads, RL Grime became official with the EP Grapes, released in 2012 by Wedidit Collective. More free uploads followed, including bootleg remixes of Rihanna’s “Pour It Up,” Chief Keef’s “Sosa,” and Kanye West’s “Mercy.” In 2013, the Fool’s Gold label released the High Beams EP with a guest appearance from rapper Problem. The album Void followed in 2014 and featured rapper Big Sean, EDM group Boys Noize, and indie act How to Dress Well. ~ David Jeffries, Rovi

Laidback Luke: Born in the Philippines and raised in Holland, Laidback Luke, aka Luke van Scheppingen, grew up in a musical household, learning guitar and immersing himself in hip-hop and graffiti culture at a young age. After a chance encounter with Dutch DJ Dobre — who had been booked to play at a high school party — Scheppingen realized that he had a connection with the vibe and energy of dance music. Utilizing a basic production setup, he set about creating his own tracks and sent a demo to Dobre. Realizing his potential, Dobre helped to champion the young producer, with Scheppingen releasing his first 12″, Loud Flava, Vol. 1, in 1995. Following up with Vol. 2 a few months later, he then turned heads with his Act the Fool 12″ on Dobre’s label Touché. His infectious blend of house and techno soon caught the ears of the music press, and with numerous releases throughout 1996, a remix of Green Velvet’s The Stalker (which was picked up by leading DJ Carl Cox), and the start of a professional DJ career, Laidback Luke had become an instantly recognizable name in the techno and house scenes. With his production work picking up pace, Scheppingen continued to DJ to sold-out crowds through to the end of the ’90s, and in 2000, he released his first major-label single, Rocking with the Best, after he signed a deal with Virgin Records. Following up with Spacefunk and Popmusic, both taken from his 2002 debut album, Electronic Satisfaction, Scheppingen’s style shifted to a more electro-house sound, and saw him remixing numerous high-profile artists including Daft Punk.

In 2003, he met Swedish DJ and producer Steve Angello after striking up a friendship via his own website’s forum. While continuing to forge their own paths in the ever-evolving dance music scene, the pair finally collaborated in 2006 with the release of Otherwize Then. As the Swedish house sound filled the charts, Scheppingen joined forces with Angello, Sebastian Ingrosso, and Axwell for the huge 2007 hit Get Dumb. With Angello and company firm favorites at super-clubs around the world, Scheppingen’s profile rose once again, with his name being linked to the world-famous Swedish House Mafia. As the electronic dance scene in America grew at the end of the noughties, the mix of electro-house, dubstep, and trance that had taken hold of Europe a few years earlier exploded as EDM. Collaborations with the likes of EDM mainstay Steve Aoki, dubstep and hip-hop producer Diplo, and U.K. chart-topper Example in 2011 firmly put the Laidback Luke name on the map. Although Scheppingen’s own releases slowed after 2011, his remix work continued, seeing him rework some of pop music’s biggest stars, including Madonna, Depeche Mode, Robin Thicke, and Tiësto. His long-awaited sophomore release materialized in 2015 when Focus was released with contributions from Yellow Claw, Benny Benassi, and others. ~ Rich Wilson, Rovi

Ghastly: Entirely self-taught, David Crow’s musical style has progressed from a large variety of genres including Ambient, Death Metal, Experimental, all the way to his current EDM based creations. Music was always important in his life, but electronic production merged with David’s brain at the age of 16 when he was creating music through a beat workstation on a keyboard and re-wiring it into microphone inputs and editing it later through a free recording program called Audacity.

After leaving his family’s goat farm in Buckeye Arizona to live out of his van on Venice Beach California in 2010, he started at the very bottom, and has been quickly been working his way up to the top. From writing music off of a battery converter and a laptop in restaurant parking lots, to currently working as a full-time studio engineer having released under OWSLA and been rated #1 by LA Weekly, David had established a name to be known, and that name is ‘Ghastly!’

Golden Features: Dance music has always loved a bit of mystery. So when a masked producer going by the name GOLDEN FEATURES arrived out of nowhere to deliver one of the biggest debut EPs of the decade, people paid attention. Two years later, Sydney producer Tom Stell isn’t afraid to reveal who’s behind the mask – and with an album on the way, he’s about to reach new heights.

It was only February 2014 when Golden Features first took the Australian dance scene by storm, after triple j host Lewi McKirdy dropped the dark, driving four-track EP on his primetime show. Hype quickly kicked into overdrive, with tens of thousands listening to the EP on SoundCloud and tastemaker media jumping on board, dubbing Golden Features Australia’s next dance superstar.

Even huge international artists like Porter Robinson were fast fans of the Golden Features sound – the U.S. star declared the debut EP “awesome” and tapped Stell for an official remix of his track Years of War, which clocked up over 1 million plays in just a fortnight. Then inthemix chose Golden Features as one of their top 25 producers of the season, MTV named him a top artist to watch and international media from the United States to South Africa featured him in pieces.

But no one was a bigger fan than triple j. By the end of 2014, lead single Tell Me had become the station’s 25th most played track of the year.

In mid-2015 Golden Features kept the magic coming with his second EP XXIV, led by the haunting single No One with Thelma Plum on vocals. No One was quickly put on high rotation by triple j and later placed in the station’s coveted Hottest 100, while over on the iTunes charts, the EP went all the way to #1.

From there, Golden Features was on the fast-track to the top: his sold-out Australian tour saw him sell over 10,500 hard tickets across six shows and bring internationals The M Machine to the country as headline support. He then flew over to the North America to play leading festivals HARD Summer, CRSSD and Holy Ship, before joining Alison Wonderland on her bus tour across the U.S. No wonder, then, Spotify named him one of their “Artists to Watch” for 2016.

With a big international profile and his huge fan base hanging out for more, this year is all about getting in the studio. After he plays his biggest show yet at Splendour in the Grass in July, Golden Features will be devoting the remainder of 2016 to finishing his debut album, a release certain to be an earth-shaker.

Tickets starting at $Sold Out