Khalid’s debut album, American Teen, has received mass critical acclaim with The New York Times calling it “a promising amalgam of bedroom art-soul and 1980s new-wave pop maximalism, and a union of lonely-boy mirror gazing with a sense of larger cultural purpose”.  TIME noted, “Preternaturally soulful 19-year-old Texan singer-songwriter Khalid has a way with beats—and words—that speaks to the modern American experience of youth in a natural, resonant way.”  Khalid has also performed on The Tonight Show Starring Jimmy Fallon, The Ellen DeGeneres Show, Good Morning America, and at this year’s SXSW where he won MTV’s Woodie To Watch Award.  Khalid has nearly half a billion streams worldwide across all partners, and “Location” peaked at #1 at Urban Radio, hit the top 5 at Rhythmic Radio, and in the top 20 on the Billboard Hot 100 chart. For more information on Khalid meet and greet packages and the upcoming tour please visit khalidoffical.com. 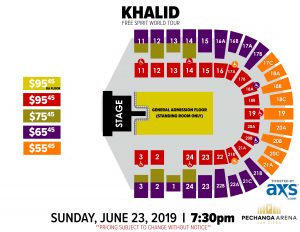