with Support from Kehlani & Jaden Smith

Canadian pop singer Justin Bieber was barely into his teens when he released his 2009 debut, My World, and became one of the youngest success stories in contemporary pop when it went either platinum or double platinum in several countries. For the next few years, successive releases — including remix compilations, acoustic sets, a documentary tie-in, a Christmas album, and even some proper studio recordings — shot forth at a dizzying rate. Bieber developed a massive global following, named Beliebers. During the early 2010s, his recording activity slowed, and he had more of a presence on celebrity gossip websites than on sales charts, but he rebounded during the middle of that decade. A native of Stratford, Ontario, Bieber placed second in a local 2007 singing competition and began posting his performances on YouTube. The videos caught the attention of Scooter Braun, a talent agent and former So So Def marketing executive, who helped Bieber land an impromptu audition with the R&B star Usher. Impressed by what he saw, Usher — along with Island/Def Jam chairman L.A. Reid — quickly signed the 15-year-old Bieber to a recording contract.

Bieber released his first single, “One Time,” in May 2009. Supported by a popular video that featured an appearance by Usher, “One Time” went platinum in both Canada and America, a feat that was replicated later that year with the release of My World. The disc was technically an EP, featuring only seven songs, but it reached number six on the Billboard 200 album chart and sold over a million copies. Less than a year after his debut, Bieber returned with the “second half” of My World, a ten-song release titled My World 2.0. Further demonstrating his and his management’s marketing power, over 8,000 fans who pre-ordered My World 2.0 had their head shots used in a photo mosaic (formed to look like a portrait of Bieber) that was displayed on the back side of the disc’s booklet. The release topped the Billboard 200. A few weeks later, a combination of My World and My World 2.0, titled My Worlds, appeared in some territories. By the end of 2010, Bieber issued My Worlds Acoustic, a set featuring acoustic versions of nine songs off the My World discs, as well as one new song.

The following February, the 3-D documentary Never Say Never was released to theaters. The seven-track Never Say Never: The Remixes, released just days after the film, maintained the flow of Bieber product, and featured appearances from the likes of Kanye West, Usher, and Miley Cyrus. Just in time for Christmas 2011 came the holiday-themed Under the Mistletoe, complete with several celebrity guest duets and an original song, “Mistletoe,” for the first single, which entered the Holiday Songs chart at number two. In 2012, Bieber returned with the proper follow-up to My World 2.0, titled Believe. With a sound based in dance and R&B, it featured production from Darkchild, Diplo, and Max Martin. Believe became his fourth number one album, paced by Top Ten hits for “Boyfriend,” “As Long as You Love Me” (featuring Big Sean), and “Beauty and a Beat” (featuring Nicki Minaj). Believe Acoustic, a sequel to My Worlds Acoustic, followed in 2013. Late that year, Bieber released the first in a weekly series of singles. Nearly all of them charted, led by Top 40 showings for “All Around the World” (featuring Ludacris) and “Heartbreaker.” Those songs, as well as others, were compiled for release as Journals, a digital download-only album that failed to chart. He also released a concert film for Christmas 2013, Justin Bieber’s Believe. A collaboration with Cody Simpson, “Home to Mama,” was the lone charting release in 2014, a year in which Bieber made headlines for an incident in which he was arrested, as well as for charges of vandalism, assault, and reckless driving.

In 2015, a remix of “Where Are You Now” appeared on Diplo and Skrillex Present Jack Ü and reached the Top Ten of the Hot 100. Later in the year, “What Do You Mean?,” a track that skillfully latched onto the tropical house subgenre — popularized by the Felix Jaehn remix of OMI’s “Cheerleader” — topped that chart. It was Bieber’s first number one U.S. single and paved the way for Purpose, his third proper studio album. ~ Matt Collar & Andy Kellman 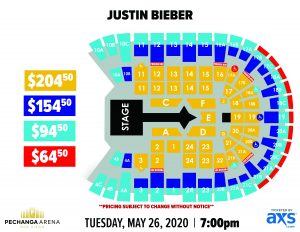