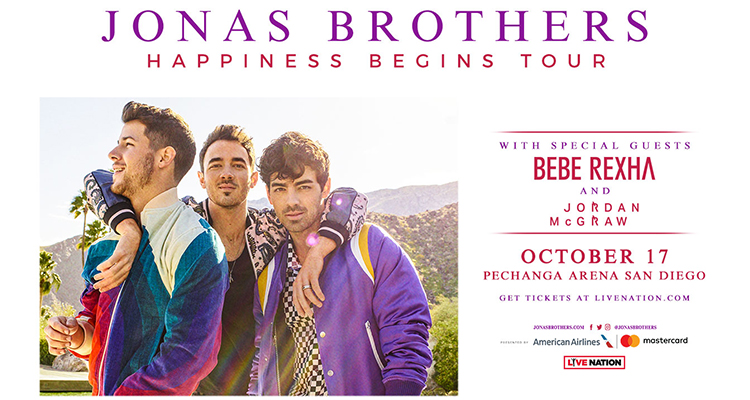 When a musical group sells more than 20 million albums, they must be doing something right…and are usually satisfied to do more of the same. Not true with the Jonas Brothers. At the height of their career, this pop trio phenomenon took a three-year hiatus to refocus their creative energies. The result is an electrifying combination of pop, rock, classic R&B, techno and dance genres ensuring the group will have new relevance to take their music to greater heights. The band spent the last year writing and producing their upcoming fifth album, V, scheduled for release later this year. “Pom Poms,” their highly-anticipated first single off the new album, went to #1 in 14 countries around the world, while the band’s current single “First Time” is proving to be the Jonas Brothers’ fastest breaking single at Top 40 radio in their career.

The Jonas Brothers’ re-emergence is already resonating with audiences. To preview their new material to fans, the Jonas Brothers staged a one-night only exclusive engagement at New York City’s Radio City Music Hall on October 11, 2012, and tickets sold out in minutes. A three-night stand at Los Angeles’ famed Pantages Theatre followed, all sold out. The Jonas Brothers have since taken their show on the road to Latin America, where they just wrapped a 16-city tour through the region and won four awards at the prestigious Viña del Mar International Song Festival, including the festival’s top award.

The band has also become part of the pop TV landscape with the highly popular reality TV series, “Married to Jonas.” Earlier this year, E! premiered the second season of Kevin and Danielle Jonas’ reality TV series that chronicles the couple balancing domestic life with Kevin’s music career. Executive produced by Ryan Seacrest, “Married to Jonas” drew 1.8 million viewers when it launched in 2012. The half-hour series was the most watched program in its time period among women 18-34 and female teens 12-17. The new season will follow the couple as their families become closer and as the Jonas Brothers finish their new album and head back on tour.

The Jonas Brothers burst onto the music scene in August 2007 with their self-titled debut album, which included the hit single, “S.O.S.” The song soared to #1 on iTunes, and the album climbed to the top five of the Billboard charts and was soon certified double platinum. With the release of the band’s second album, A Little Bit Longer, the Jonas Brothers became the first artist ever to have three albums on the Billboard Top 10 at once: Jonas Brothers, A Little Bit Longer and the Camp Rock soundtrack. In 2009, they released Lines, Vines and Trying Times, a global hit that became their second #1 album in one year.

The Jonas Brothers have sold a combined 20 million units worldwide, earned over 40 Gold and Platinum record certifications and own the Guinness World Record for “Most Singles to Enter Straight into the U.S. Top 20 in a Year by a Group,” with five singles in 2009. They received their first Grammy nomination in 2008 for Best New Artist, and have won nearly 50 awards across the globe, including an American Music Award.

The band members were early adopters on social media, and have incredible support across their various social networks, allowing them to engage and communicate directly with fans across the globe. The Jonas Brothers’ Official Facebook page has over 12,789,189 likes, and the band’s Twitter handle has over 4,236,114 followers.

With all the band’s professional accomplishments, the Jonas Brothers remain devoted to giving back. In 2008, they started the Change for the Children Foundation to support programs that motivate and inspire children to face adversity with confidence, determination and a will to succeed. Through their foundation, fans are encouraged to get involved and support causes such as the Special Olympics, D-Vision and DoSomething.org, among others. To date, they have raised $4.5 million for Change for the Children and were honored by the TJ Martell Foundation for their charitable work in 2011. This past September, the Jonas Brothers were honored for their efforts as honorees at Variety’s Sixth Annual Power of Youth event. 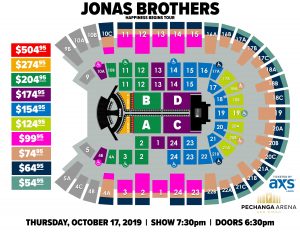