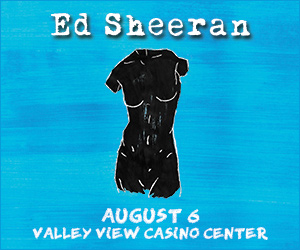 **Delivery Delay**
-E-Tickets will be issued 72 hours before the show.
-All Standard Mail, Will Call, and Tickets purchased at the box office will be available 2 weeks prior to the show.

Global superstar and multi-GRAMMY winner Ed Sheeran has quickly established himself as one of the world’s biggest musical artists with over 22 million albums sold. The British singer-songwriter kicked off the new year by unveiling two singles – “Shape Of You” and “Castle On The Hill” – from his just released 3rd full length album “÷.”  “Shape Of You” debuted at #1 with “Castle On The Hill” following at #6 on the Billboard Hot 100, making Sheeran the first artist ever in the chart’s 58 year history to have two singles simultaneously debut in the Top 10.  “Shape Of You” has since held the top spot on the Hot 100 for 5 weeks, and currently sits at #1 at Top 40 radio, Hot AC radio, iTunes “Overall Songs” chart, and both Spotify’s Global and U.S. Top 50 charts.  Likewise, Sheeran is the most streamed artist worldwide on Spotify.  “Shape Of You” and “Castle On The Hill” were recently certified 2x-Platinum and Gold respectively, becoming the first 2 songs released in 2017 to receive certifications from the RIAA.  Sheeran kicked off a high profile television blitz, performing both songs on Saturday Night Live, then travelling cross-country overnight to take the stage at the 59th GRAMMY Awards less than 24 hours later.

“÷”  is the follow up to Sheeran’s 2014 album ‘x’ (pronounced multiply). After debuting at #1 on the Billboard 200 upon its release, the album has since been certified 4x-Platinum in the US and earned two GRAMMY nominations, including the prestigious “Album Of The Year.” Additionally, “x” spawned four consecutive multi-platinum singles in “Sing,” “Don’t,” “Photograph,” and his global smash and biggest single to date “Thinking Out Loud,” which marked his first #1 at Top 40 radio and won a pair of GRAMMY awards, including highly coveted “Song Of The Year.”  One of the planet’s most popular live performers, Ed has played sold out headline shows at some of the biggest venues around the world, including Gillette Stadium in Foxborough, MA, Suncorp Stadium in Sydney, and at London’s Wembley Stadium in front of 240,000 fans over 3 nights. Ed first broke through to the mainstream in 2012 with his debut album “+” (pronounced plus), which was a top 5 debut in the US  and spent three weeks at #1 in the UK. The 2x-Platinum “+” features “The A Team”, an international smash which earned Ed his first GRAMMY nomination (“Song Of The Year”) and has been certified 3x-Platinum in the US.  Sheeran launched his own imprint, Gingerbread Man Records, in 2015, with the signing of fellow British singer songwriter Jamie Lawson – whose self-titled album debuted at #1 in the UK – and Irish troubadour Foy Vance.