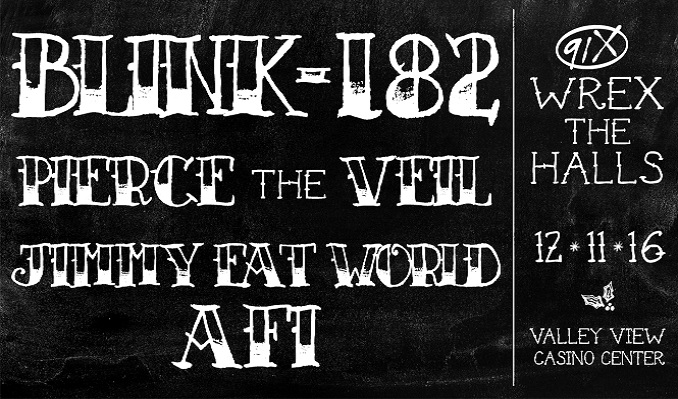 Blink 182 are an American rock band formed in Poway, California in 1992. The band currently consists of bassist and vocalist Mark Hoppus, drummer Travis Barker, and guitarist and vocalist Matt Skiba. Founded by Hoppus, guitarist and vocalist Tom DeLonge, and drummer Scott Raynor, the band emerged from the Southern California punk scene of the early 1990s and first gained notoriety for high-energy live shows and irreverent lyrical toilet humor. In its early years, Blink-182 toured heavily behind the band’s debut, Cheshire Cat (1995). The group signed with major label MCA Records to co-distribute its second album, Dude Ranch (1997). The group’s next two releases, Enema of the State (1999) and Take Off Your Pants and Jacket (2001), were enormous successes on the strength of radio and MTV airplay. The eponymously titled Blink-182 followed in 2003 and marked a stylistic shift for the group. DeLonge quit in 2005, sending the band into what was termed an “indefinite hiatus”. They reunited in 2009, producing the trio’s sixth album, Neighborhoods (2011). In 2015, DeLonge again exited and was replaced by Alkaline Trio guitarist and vocalist Matt Skiba. The band’s seventh studio album, California, was released on July 1, 2016.

Pierce the Veil is an American rock band from San Diego, California. Pierce the Veil has released three studio albums and has toured worldwide since the release of their debut album, A Flair for the Dramatic in 2007. The band released their second full-length studio album, titled Selfish Machines in 2010. Their third album, Collide with the Sky, was released in 2012, and is their first album under the Fearless Records label. Featuring the hit first single “King for a Day”, the album debuted at No. 12 on the Billboard 200. Their fourth and latest album, Misadventures, was released on May 13, 2016.

Jimmy Eat World is an American rock band that formed in 1993. The band is composed of lead vocalist and guitarist Jim Adkins, guitarist and backing vocalist Tom Linton, bassist Rick Burch and drummer Zach Lind. As of June 2013, Jimmy Eat World have released eight studio albums, the last seven featuring the current lineup. The four piece’s commercial breakthrough came with the successful release of several singles from the album Bleed American (2001). Four singles from the album charted within the top twenty positions of the Hot Modern Rock Tracks chart, with “The Middle” reaching the number one position. Jimmy Eat World’s follow-up album Futures (2004) featured another Modern Rock Tracks number one song, “Pain”. The RIAA certified Bleed American platinum and Futures gold, rewarding the two albums for selling over one and a half million records between them. The band’s sixth album Chase This Light (2007) became the band’s highest charting album, peaking at number five on the Billboard 200. The band will release their ninth album, Integrity Blues, on October 21, 2016.

December 8, 2016 (San Diego, CA) – San Diego’s 91X announced today the cancellation of Kaleo from the Wrex the Halls concert on Sunday, December 11 at Pechanga Arena San Diego. Filling in their spot will be legendary punk rock band AFI.
AFI will join Blink-182, Pierce the Veil, and Jimmy Eat World performing live at the concert. Tickets are still available.
Kaleo plan to schedule a new show in April, and released a statement about the cancellation:
“Our deepest regrets and apologies that we will not be able to perform at the 91X Wrex the Halls show on Sunday. A band member has fallen ill with a severe case of pneumonia and he needs this time to rest and recover. Thank you as always for your love and support.”
“We are super bummed about Kaleo, we wish a speedy recovery and look forward to seeing them back at full strength in April,” said 91X Program Director Mike Halloran. “We are also completely blown away to have AFI come to San Diego and make Wrex the Halls 2016 more memorable than ever.”
91X (XTRA-FM 91.1) is owned by Local Media San Diego, LLC; a San Diego-based broadcasting company backed by private equity firm, Thoma Bravo, LLC. LMSD also operates Z90.3 (XHTZ-FM) and Magic 92.5 (XHRM-FM) as a member of SDLocal, a joint operating arrangement between LMSD and Midwest Television, Inc., operators of 100.7 KFM-BFM (KFMB-FM) and AM 760 (KFMB-AM).