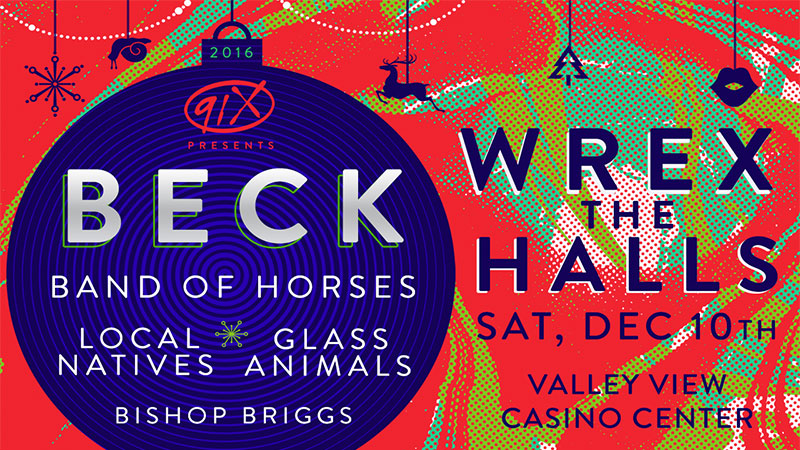 Beck began playing music in local coffeehouses around 1990, and has been astounding and delighting critics with his unique output ever since. Beck released his first hit single, “Loser,” from his debut album, Golden Feelings, in 1993. The following year, he released his third studio album, Mellow Gold, which was a hit. Later albums include Odelay (1996), Guero (2005) and Morning Phase (2014). Beck’s music has been deemed a witty fusion of rock, folk, rap and hip-hop.

Band of Horses are an American rock band formed in 2004 in Seattle by Ben Bridwell. The band has released five studio albums, the most successful of which is 2010’s Grammy-nominated Infinite Arms. Band of Horses’ fifth studio album, Why Are You OK, was released in June 2016.

Local Natives are an American indie rock band based in Los Angeles. Their debut album, Gorilla Manor, was first released in the UK in November 2009, and later released in the US on February 16, 2010. The album debuted in the Billboard 200 and at No. 3 in the New Artist Chart. Their second album, Hummingbird, was released in January 2013. Their third album, Sunlit Youth, was released in September 2016.

Glass Animals are an English indie rock band from Oxford. The group released their debut album Zaba in June 2014 as the first release on producer Paul Epworth’s label Wolf Tone, and their second album How to Be a Human Being was released on 26 August, 2016 to critical acclaim. The band have toured internationally and featured on line ups at festivals such as Glastonbury, Coachella, Bonnaroo, Lollapalooza, Reading/Leeds, Falls, Southbound and Bestival.