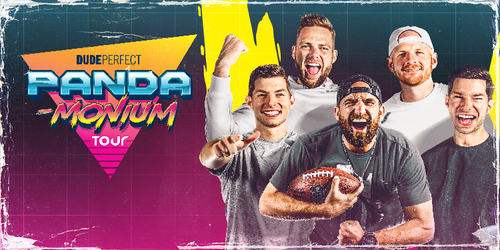 Premier Productions, a leading independent producer of quality live entertainment around the world, has announced the launch of the 2023 Dude Perfect Panda-Monium Tour,  coming to San Diego on July 13, 2023. YouTube sensations, Dude Perfect — Tyler Toney, Cody Jones, Garrett Hilbert and twins Coby and Cory Cotton — will bring their engaging and action-packed show to 24 cities next summer after several sold-out events on their 2022 tour, which has been recently nominated for Pollstar Family Event Tour of the Year.

Dude Perfect is the leading sports and entertainment group in the world, amassing over 58 million YouTube subscribers and nearly 16 billion YouTube views since launching their channel 13 years ago as roommates in college at Texas A&M University. Pioneers of “sports adjacency” content, Dude Perfect, headquartered in Frisco, Texas, is known for specializing in the impossible with their hundreds of trick shots, “Stereotypes” and “Overtime” content franchises on YouTube, “Bucket List” travel series, their sold-out national arena live tour and content creation with some of the world’s most famous athletes and celebrities. Comprised of Tyler “Beard” Toney, twin brothers Cory and Coby Cotton, Cody “Tall Guy” Jones and Garrett “Purple Hoser” Hilbert, the Dudes have a total following of over 100 million and have come to define accessible family-friendly entertainment in today’s media environment.

Demand for the family-friendly brand continues to grow, with Dude Perfect joining Amazon’s Thursday Night Football broadcast and the announcement of a new Dude Perfect fan destination and headquarters. In the 2023 iteration of their tour, the Dudes will bring their laugh-out-loud antics to the stage and compete in crazy, trick-shot themed battles. The tour will feature some of the most popular segments from their award-winning “Overtime” series like Cool Not Cool and Wheel Unfortunate with Ned Forrester, and new fan-favorite segments like Get Crafty and Top 10 are in the works as well.