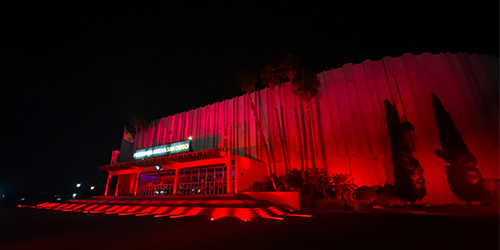 Some of San Diego’s most popular and recognizable event venues were lit up in red Tuesday night in solidarity with venues across the nation reminding lawmakers of the event industry’s existence and its need for federal relief dollars, NBC 7 reported.

Red Alert Restart is a movement highlighting the live event venues nationwide that have been darkened and muted by the coronavirus pandemic.

“Right now we are the forgotten industry and there’s no hope in sight. There’s no governmental aide pointed at the entertainment industry,” said Mike Kociela with the San Diego Event Coalition.

On Tuesday, volunteers set up several banks of red lights in the parking lot of Pechanga Arena and pointed them at the building. The…cylindrical structure was transformed into a column of infrared light noticeable from miles away on nearby freeways.

One of those volunteers was John Brunelle. He’s a career stagehand and video engineer who’s been out of a job since March.

“Just to bring awareness to the fact that nobody is working in these venues at the moment and it’s kinda scary,” said Brunelle, describing the purpose of the nationwide demonstration.

The industry hopes its efforts will grab the attention of Congress, and encourage its members to pass the Restart Act which would provide much-needed assistance to the industry.

“We go in and we turn it into magic. We are the first people in and the last people out and it takes hundreds of us to put together a great show,” said Brunelle.

Industry members are also asking for more collaboration with local officials on a safe reopening plan, like other industries have received.

For more information on the Red Alert and the San Diego Event Coalition, click here.