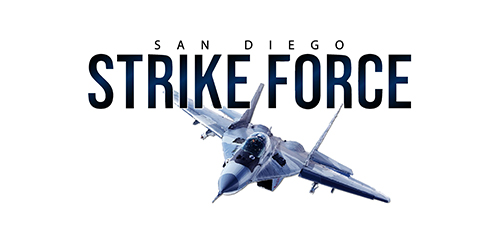 The San Diego Strike Force (www.sdstrikeforce.com) held a press conference today at the Pechanga Arena San Diego announcing itself as the newest entry to the 10-team Indoor Football League (IFL).

The Strike Force will play a 14-game season in 2019 with seven games at the Pechanga Arena and seven on the road. The San Diego squad will take part in the IFL’s first game of the 2019 season when it faces the Quad City Steamwheelers at the TaxSlayer Center in Moline, Illinois on Friday, Feb. 22. The Strike Force’s first home contest at Pechanga Arena is set for Sunday, March 3 at 5:05 p.m. PT. All IFL games are streamed free on YouTube. The Strike Force’s complete 2019 schedule can be found below.

Season and single-game tickets for all seven Strike Force home games at Pechanga Arena are currently on sale through the team’s official website, www.sdstrikeforce.com.

Single-game tickets start at just $15 apiece and a front row seat to a Strike Force game can be purchased for as little as $40.

Parking will be FREE for all fans attending San Diego Strike Force games at Pechanga Arena.

“Today marks the culmination of a lot of hard work by a talented group of people,” said Strike Force Team President Greg Anderson. “But this is just the first step. I’m extremely excited to bring the Strike Force and the Indoor Football League to the Pechanga Arena and the great football fans of San Diego. Getting to this point took a lot of hard work and dedication and from here on out, our number-one goal is to deliver a championship-caliber team both on and off the field to San Diego.”

“This is a proud day for the entire Indoor Football League family,” said IFL President Mike Allshouse. “It’s long been our goal to build and expand our Western Conference and we can’t think of a better city to start with than San Diego. The city has a tremendous football history and incredibly passionate fans. We are extremely confident that the fans will embrace the Strike Force and the team will be successful in San Diego.”

A former NFL and USFL wide receiver and long-time international football coach, Anderson will head up the organization as team president, while former quarterback and long-time certified sports agent Brian Cox will serve as the team’s general manager. Ameer Ismail, a former All-America linebacker at Western Michigan who went on to spend time in the NFL with the Kansas City Chiefs and Jacksonville Jaguars, will serve as head coach.

Upcoming auditions also are scheduled for Jan. 5 at Pasadena (Calif.) High School (12 noon), as well as Jan. 12 in San Diego (location TBD) and Atlanta (location TBD). Additional details about tryouts will be available at www.sdstrikeforce.com. The team will report to training camp Feb. 4 to begin preparations for its season opener on Feb. 22.

The IFL’s roots trace back to 2003 when two businessmen in Texas created the six-team Intense Football League. The league grew from six to eight, to 10 teams. In 2004, several veteran team operators in the Midwest formed a rival league, known as the United Indoor Football Association, and that league enjoyed four years of success. During this period, league executives from both sides admired one another’s efforts and in 2008, the suggestion of a merger became reality as the two leagues agreed to dissolve their former affiliations and form the new Indoor Football League. Since that time, Sioux Falls has claimed six United Bowl Championships (2011-16), and Arizona (2017) and Iowa (2018) one apiece. The IFL’s official website can be found at www.GoIFL.com.