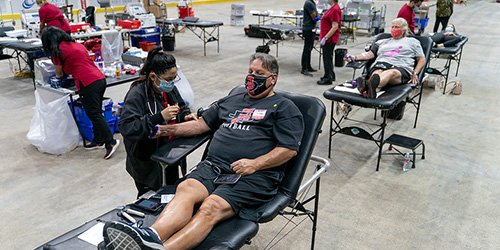 Blood banks all over the country are urging people to come out and donate during these crazy times. San Diegans heard the call with 147 people signing up to give during the 4th Annual Aztecs for Life Blood Drive on November 17 at Pechanga Arena. 87 of the donors were first time participants.

In total, 142 units of blood were collected, potentially saving the lives of 423 people, according to The American Red Cross.

The Red Cross says volunteers donating blood is the only way they can keep the supply up throughout the year. According to the American Association of Blood Banks, over 4,000 blood drives have been canceled from mid-March due to the coronavirus. That equates to 130,000 donations being lost.

Although Tuesday’s blood drive reached its capacity, you can always schedule a donation online.